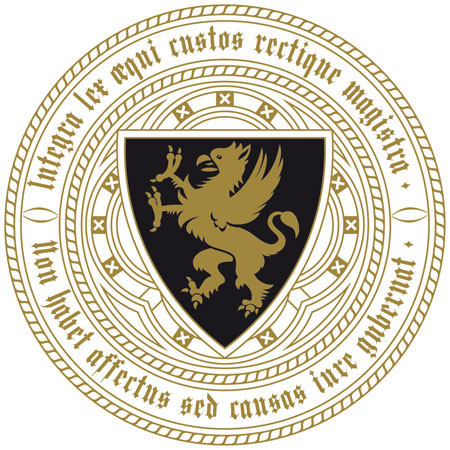 The Inn’s badge (often incorrectly called the crest) is heraldically described as “Sable a griffin segreant or”, that is, a golden griffin on a black field (an alternative version was also formerly used, with a blue field).

Originally the Inn used the Grey or de Grey arms, Barry of six argent and azure (in other words six silver and blue horizontal stripes) within a quartered gold and blue border, which can be seen in the pediment over the Benchers’ entrance to the House premises, as above.

There is no record of precisely when the change to the griffin was made, but it apparently occurred at some point in the 1590s. Nor is there any firm explanation of why. The most commonly accepted one is that the griffin was adopted from the arms of Richard Aungier, who died in 1597 in mid-career (murdered in his chambers by one of his younger sons): he was Reader four times and Treasurer three times, and clearly very closely concerned with the management and affairs of the Inn. It has also been suggested however that the griffin may have been an undocumented livery badge of the Grey family.

Whatever the source, a significant reason behind the change is presumed to have been the straightforward one of display, in that the griffin would have made a far more spectacular and distinctive badge for the “Shows” in which the theatrical talent of the Inn was engaged, than the plain bars of the de Grey arms.

The seal of the Society is the Badge encircled by the motto, of which there is again no record of when or why it was chosen, although it seems to be of about the same age as the griffin. The motto reads: Integra Lex Aequi Custos Rectique Magistra Non Habet Affectus Sed Causas Gubernat (“Impartial justice, guardian of equity, mistress of the law, without fear or favour rules men’s causes aright”).

In 2019 the Inn launched a redesigned brand, which includes several subtle yet important design evolutions and key changes to our badge, with a rounder shield, and a bolder griffin with larger wings.

History of the Walks

Historical information about the Walks

History of the Walks