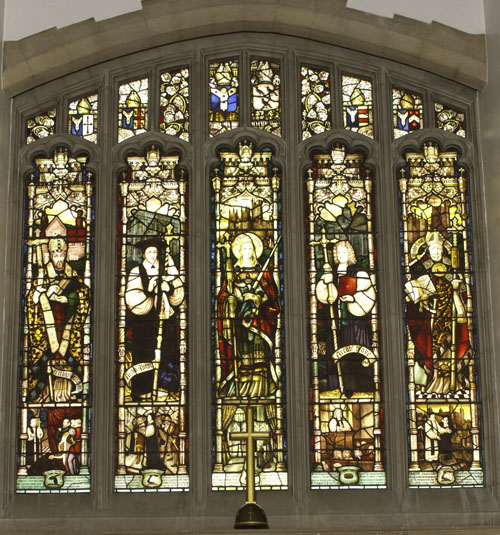 The first mention of stained glass windows in the Chapel occurs on 16 May 1539, when, further to a decree of Henry VIII, the “gloriously painted” window of Saint Thomas Becket was removed, and replaced by one of “Our Lord praying in the Mount”, of which there is no further record.

Dugdale in his “Origines Juridiciales” (2nd edition 1671) lists 15 lay armorial windows in Gray’s Inn Chapel, all now either destroyed or in the Hall.

At the Chapel rebuilding in 1698/99 no mention is made of the windows, and silence on the subject continues until 8 July 1861, when a report to Pension on the state of Chapel included the recommendation that to cut down glare, “all windows except that in the south wall. . . to be decorated with stained glass”. A Committee chose from a number of designs prepared by “Mr Powell the eminent glass stainer” for the east window, “the small window looking east in the southern gallery” and 2 of the windows on the north side, all for £112. The centre north window was to have a more elaborate treatment, estimated at £54.

Regarding the identity of Mr Powell, there are two possibilities: (1) the London firm later known as Whitefriars Glass traded throughout the 19th century as James Powell & Co, and produced much stained glass for windows as well as its domestic glassware. Several members of the Powell family at various times were distinguished as designers of stained glass. (2) The Birmingham firm of Hardman & Co, who worked closely for many years with Pugin, were directed by John Hardman Powell. However, none of the more distinguished Whitefriars Powells was active in the early 1860s; and the order books of that firm, available online, contain no reference to any work for Gray’s Inn. J H Powell, on the other hand, was an active designer from the early 1850s, and at the time of the Chapel project had just completed Pugin’s high-profile scheme of glass for the new Houses of Parliament. It thus seems more likely that he was the “eminent glass stainer” in question. 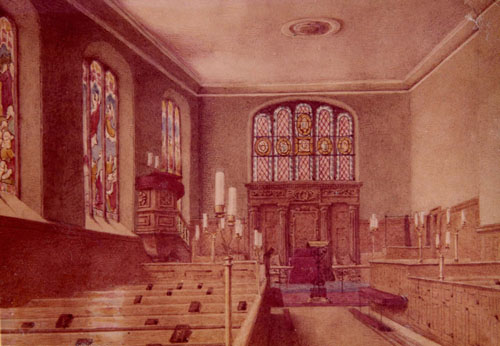 However eminent the designer, the Inn Committee seem to have overdone their economy, for on 19 Nov 1862 it was reported that “the effect of the stained glass insertion [was] not satisfactory”. Samuel Turner, Dean of the Chapel, stepped in and presented three “handsome” stained glass windows for the north side of Chapel, which Douthwaite recorded in 1886 as depicting the Ascension, the Sermon on the Mount, and Christ in the Temple in the midst of the Doctors.

The coloured painting is a rare picture of the Chapel interior after the installation of the three replacement windows, around 1863, but before the window move of 1890. This suggests that the unsatisfactoriness may have lain not only in the degree of glare prevention, but possibly also in the Inn wanting something more impressive than it was prepared to pay for. The centre north window certainly seems to contain an Ascension, and there is no reason to doubt Douthwaite on the subjects of the other two. The east window however was apparently not replaced, so presumably shows Powell’s rejected scheme, which consists of a geometrical pattern of pastel glass incorporating a few older armorial panels, not especially resistant to glare and not highly dramatic.

Neither the Pension minutes nor Douthwaite’s full-length “Gray’s Inn: Its History and Associations” (1886) records the name of the maker of Turner’s windows, but Douthwaite’s earlier publication, “Notes on Gray’s Inn” of 1876, mentions that it was Alexander Gibb, a popular maker of the period (some of his windows are still to be seen in All Saints Margaret Street, for example), but not of the quality of Powell. The same book also notes that the armorials in the east window were those of Archbishops Juxon, Sheldon and Wake, and of Bishops George Morley of Winchester, Nathaniel Crewe of Durham, and Walker King of Rochester. 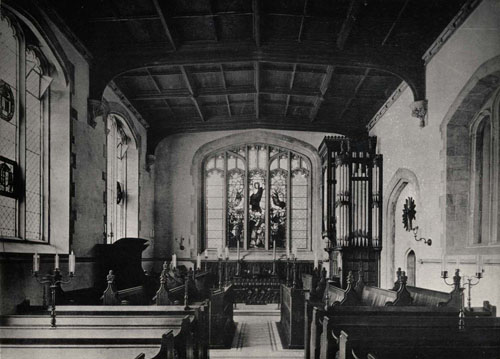 as moved to the east window. The other north windows were removed entirely in the restoration of 1893 by Heaton, Butler & Bayne, another firm of stained glass makers located close by.

A photograph, which must date from shortly after the restoration was completed, shows the Ascension in the east window, while the north windows have reverted to plain glass with a few small armorials (the photo also shows part of the two south windows uncovered during the 1890s restoration).

However, between 1893 and 1899 five new panels were commissioned for the east window (see top of page), four showing an Archbishop of Canterbury with a Gray’s Inn connection: Whitgift, Juxon, Wake and Laud, with Becket in the centre retaking his place. All were by George William Ostrehan, a promising artist who died young. The donors were Henry Charles Richards, a Bencher and later Treasurer, who gave three panels; the Preacher, Joseph Lupton; and William Paterson, a Bencher and former Treasurer (1894). 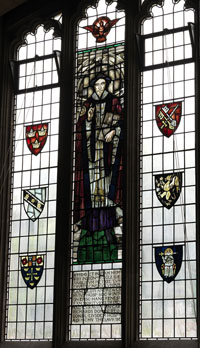 In 1907 the middle window of the north wall was given a figure of Bishop Lancelot Andrewes, with armorials in the side lights, by Selwyn Image. This was also donated by Henry Richards, who commissioned it in 1905, when he was Treasurer but also terminally ill, as is mentioned in the inscription (he died in June of that year).

On the south side of the nave are two windows of three lights. These predated by many years the restoration of the chapel in the 1690s: they were Late Perpendicular (15th century) although often but incorrectly referred to as “Tudor mullions”. Until 1842-45 they were on an external wall, and therefore glazed, but at that date a building extension occluded the south side of the chapel, and they were filled in and plastered over. When the chapel was restored in 1893, the south windows were uncovered again, but although the frames were freed of the plaster and made visible, the interiors were not pierced for glass, as they still had no light, but were left blind. 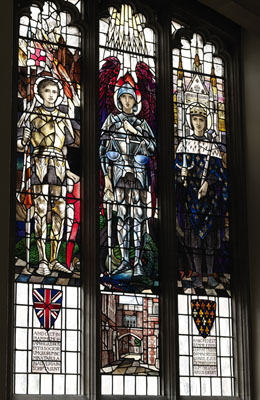 In 1919 a war memorial plaque was set between these two blind windows on the south wall, accompanied by a memorial window in the central light on 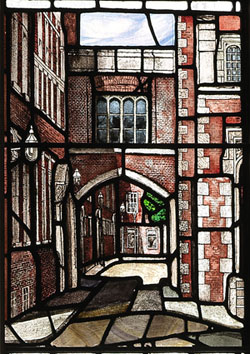 the north wall. This was by Christopher Whall, and was finished in 1920. It depicts Saint Michael between Saints George and Louis, but is of added interest because it also contains a panel showing the bridge that in 1919 used to span the road connecting South Square and Gray’s Inn Square (which was destroyed in the Blitz, rebuilt, demolished in the 1970s, and rebuilt again in 2011). 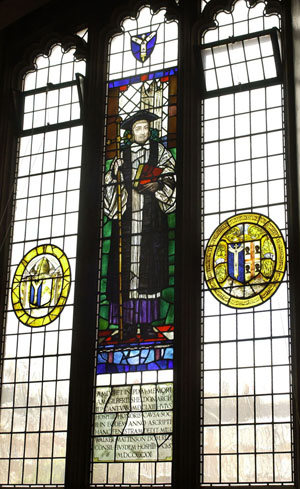 So that the new memorial window should sit directly opposite the memorial plaque, the 1907 window of Lancelot Andrewes was moved to the west. To balance it and avoid having a single blank window in the north wall, another former Treasurer, Sir Miles Mattinson, offered to donate a new window depicting Archbishop Gilbert Sheldon, which at his specific request was to be executed by R Anning Bell. It was also duly installed in 1920.

In 1927 Master Mattinson made a further, very lengthy and detailed, proposal for the better presentation of the war memorial, which in summary was that as he disliked

the dulling effect of the blind windows in the south wall on the war memorial in particular and the Chapel overall, he offered to pay for two new windows, again by R Anning Bell, showing Archbishops Bancroft and Williams, to be illuminated by electric light from behind, which is what was done. He further specified that Bancroft should occupy the central light of the more westerly window, and thus be directly opposite Lancelot Andrewes, because of the historical connections between them. Williams therefore was to occupy the centre of the other.

All these windows survived the war, unlike the Chapel itself. When it was rebuilt, the two south windows were reduced in size and for better illumination were glazed in clear glass, so there was no room for Bancroft and Williams. These windows disappeared from view until 2009, when they were discovered in the care of the London Stained Glass Repository, a charity for the rescue of endangered stained glass run by the Worshipful Company of Glaziers, but are now strikingly reinstalled on either side of the west gallery, again backlit by electric light.

Historical information about the Inn's past Chapel Readers

Search a listing of all past Preachers