Kathleen Maria Margaret Sissmore, later known as Jane Sissmore and then Jane Archer after her marriage in 1939, was the fifth woman admitted to Gray’s Inn, on 17 October 1921. She was the joint-fourth woman called to the Bar from the Society, called on 17 November 1924 with Dorothy Foster Jeffery (adm 26 October 1921) and Venetia Josephine Mary Stephenson (adm 18 January 1922). Rather than pursuing a legal career, however, Sissmore rose to prominence as the first female officer of MI5.

Born in Bengal on 11 March 1898 to John Edmund Angelo Sissmore and his wife Kathleen Maud née Forbes-Smith before moving to London as a child, Sissmore joined MI5 straight out of school in 1916 as a clerk. In 1922 she was promoted to be in charge of the registry and made controller of all women staff. She received the MBE in 1923 and made history in 1929, when she was moved to B Division (investigations and inquiries), in charge of the investigation of Soviet intelligence and subversion activity, thus becoming MI5’s first female officer.

In 1940, Sissmore (now Jane Archer) was responsible for debriefing the Soviet Intelligence officer Walter Krivitsky. Under the name “Mrs Moore”, she learned from Krivitsky that there were two Soviet agents currently working in Britain. On the basis of this information she conducted a four-week interview in Britain with him, accompanied initially by Valentine Vivian, head of counter-espionage at SIS, and Jasper Harker, the head of B Division. Although Sissmore produced an 85-page report on the interview (which subsequently became incorporated in an MI5 overall review of Soviet intelligence activity), Krivitsky’s information proved too cryptic to make it possible to identify Donald Maclean and Kim Philby as the two Soviet agents. However, her debriefing of Krivitsky did highlight that Soviet espionage activity in Britain was far greater than anyone in MI5 had previously suspected.

Despite this, late in 1940 Sissmore was dismissed by her former boss and now-acting director of MI5, Jasper Harker, apparently more for Harker’s insufficiencies rather than her own; shortly after her dismissal, Harker was relegated to deputy director. Sissmore immediately took up a post in the Secret Intelligence Servce (SIS, otherwise known as MI6), and by 1944 was transferred to work in Soviet and communist counter-intelligence, run by the Soviet double agent Kim Philby. In his memoirs, Philby remarked that in his opinion, Sissmore was the second most able professional intelligence officer ever employed by MI5, and he made a point of sidelining her so as not to be discovered [Kim Philby, My Silent War, Chapter VII].

Sissmore returned to MI5 in 1946, after Jasper Harker had retired as deputy director. During this second stint at MI5 she was involved with the investigation and arrest of a number of suspected Soviet spies. In 1951, Donald Maclean was forewarned of his imminent arrest by Guy Burgess, who had been recalled to London on an invented pretext by Kim Philby. After Maclean and Burgess absconded to Russia, Sissmore and her colleague, Arthur Martin, were tasked with investigating Philby’s past, to determine whether or not he was a Soviet agent. The evidence compiled in this investigation was enough to cause Philby to be asked to retire from the SIS.

In 1952, she discovered documents implicating John Cairncross as a Soviet double-agent. She continued to work at MI5 throughout the 1960s.  She died in Dorset in September 1982. 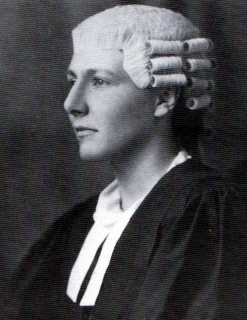 Pictured in 1924 on becoming a barrister.