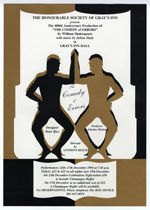 On 28 December 1594 the first known performance of Shakespeare’s “The Comedy of Errors” took place in Gray’s Inn Hall, as part of the Inn’s Christmas festivities. These were recorded in detail in the “Gesta Grayorum”, a contemporary account although not published until 1688.

The play was enacted, according to the “Gesta”, by a “company of base and common fellows”, but in the comic context it seems clear that the description is not meant to be taken seriously. There is continuing debate, based on apparently conflicting sources, over whether the company was Shakespeare’s or another.

The “Gesta Grayorum” also contains the script of a masque, the “Masque of Proteus”, which was performed before Queen Elizabeth I at “Shrovetide” 1595 (opinions differ as to the exact date).

In 1956 it was revived for Elizabeth II, together with a re-enactment of the installation of the Prince of Purpoole from the 1594 Christmas revels, and is illustrated above, in the absence of any image of the 1594 “Comedy of Errors”.

A link to the text of “Gesta Grayorum” as published in 1688 can be found in the External Online Texts section.