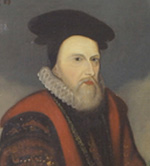 William Cecil, later Lord Burghley (1520-1598), admitted 1541 and elected an Ancient 1547, was for decades, as Elizabeth’s Secretary of State and Lord High Treasurer, the most powerful man in Elizabethan England.

The Inn of the 16th and early 17th centuries was dominated by his family and circle of influence, which included Francis Bacon (his wife’s nephew) and Francis Walsingham, head of the secret service (his subordinate). This gave the Inn an extraordinarily influential position on the national stage.

The header shows a detail from the Inn’s portrait of Lord Burghley Seated on an Ass, which he was accustomed to ride at his country house for light exercise while conducting state business.