Home > The Inn > History > The Buildings > The Hall

The life of the Inn is focused on the Hall, and so it has been throughout our long history; more so perhaps in the 15th and 16th centuries when the students resided in the Inn and attendance at dinner (lunch) and supper in Hall was compulsory, as also were the sessions of teaching and practical exercises. 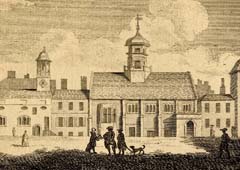 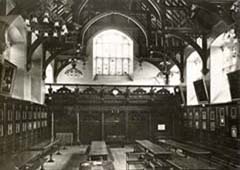 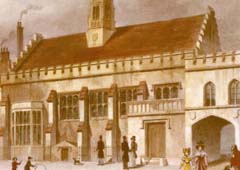 The Hall has been its present size and shape since it was “re-edified” in 1556-8, except that it then had no screen. Even the grievous war damage of 1941 did not wholly destroy those 16th century walls, and the glass, pictures and Treasurers’ shields which had been removed to a place of safety, were able to be replaced on the reconstructed walls.

The Screen at the west end of the Hall is among the most interesting possessions of Gray’s Inn. Tradition claimed that it or part of it was made from the wood of a captured Spanish galleon, and that the wood was the gift of Queen Elizabeth I.

to heat the Hall more efficiently than a fire-place in the wall, a heavy iron stove, with three sides and a flat top, was installed in 1815 in the centre of the Hall. Each side formed a fireplace with the smoke being drawn away through flues led under the floor and connected to a chimney.

Some of the stained glass in the windows dates back to the 16th century. The earliest commemoration is dated 1462, which can be seen in the top left hand side of the north side oriel window. In the centre of that window at the top are the great arms of the Duke of Albermarle (General Monck) who led King Charles II’s army into London at the Restoration. The Accounts Ledger for 1660 records that the Benchers, no doubt wishing to exhibit their loyalty, paid 10 shillings for a carriage to take them to greet General Monck as he marched into London.

Lunch and Dining in Hall

Take a look at the weekly lunch menu

Lunch and Dining in Hall