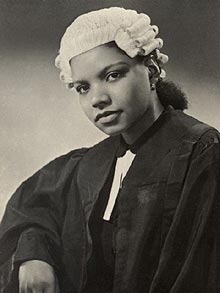 Known as “West Africa’s Portia”, she was the first Sierra Leonean woman to be called to the Bar and to practise in Sierra Leone.

Born into a prominent legal family – both her father and grandfather were distinguished lawyers in Freetown – she was educated in England, returning to Sierra Leone in 1943 to join her father’s practice.

The war was ongoing as Frances sailed home on the SS California, and off the west coast of Africa the ship came under heavy attack and was wrecked. Fortunately, Frances managed to get home via Casablanca but having lost all of her possessions including her wig and gown.

Frances took over her father’s practice in Freetown and in due course became the head of a set of chambers of women lawyers, establishing herself as a distinguished and courageous practitioner. She represented many of the large international companies in Sierra Leone and was appointed Legal Adviser to the British High Commission. She also took on cases that directly involved women’s rights and became President of the Bar.

Frances returned to England when civil war broke out in Sierra Leone in 1991.

Getting here and our opening hours

Find out about the Inn's news and announcements