Home > The Inn > History > Women of the Inn > Sophy Sanger

Sophy Sanger, the tenth woman admitted to Gray’s Inn, was born on 3 January 1881 in Westcott, Surrey, to the wealthy druggists’ wholesaler Charles Sanger and his wife Jessie Alice née Pulford.

She was the youngest of their six children, and was the sister of Charles (C. P.) Sanger, the legal authority on wills and intestacies in the early twentieth century.

Sanger did not initially pursue a career in the law. Between 1899 and 1902 she read mathematics at Newnham College, Cambridge, before studying moral sciences in 1903. At Cambridge, Sanger developed an interest in politics; she became a pacifist after hearing the Quaker Hilda Clark speak at Newnham during the Second Boer War (1899-1902).

Between 1903 and 1909 Sanger worked for the Women’s Trade Union League, setting up a legal advice bureau for the women’s union. At the same time, Sanger studied labour law at University College, London. This work made her the authority on insurance regulations for workers’ compensation, and at the age of just twenty-three she was called before a parliamentary commission in the House of Lords to give evidence relating to workmen’s compensation.

In 1905, Sanger set up the British arm of the International Association for Labour Legislation, and between 1909 and 1919, she focused on international labour issues, editing and writing for the quarterly World’s Labour Laws. In these ten years, Sanger campaigned for issues as diverse as the abolition of child labour, the prevention of anthrax, and the prohibition of the use of white phosphorus and lead.

In February 1919, after the First World War, Sanger wrote the draft to the Paris commission regarding the establishment of the International Labour Office (ILO) in the Treaty of Versailles. Thus, when the ILO was set up in Geneva the same year, Sanger was appointed its first chief of its legislative section, a post she held until 1924.

By this time women could be admitted to the English Inns of Court, and on 6 October 1922 (while still resident in Geneva), Sanger became the tenth woman admitted to Gray’s Inn. Her references for admission were B. A. Clough, principal of Newnham College, Cambridge, and her brother (and Lincoln’s Inn barrister) Charles Sanger. She was called to the Bar on 20 June 1928. Once qualified, Sanger did not practise, though she did contribute an article on labour law to the Encyclopaedia Britannica. Sanger died on 7 December 1950 in Cambridge. 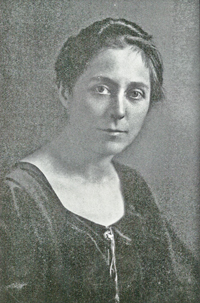 Portrait photograph of Sophie Sanger, published as the frontispiece to “Sophy Sanger: A Pioneer in Internationalism” by A M Allen, privately published 1958