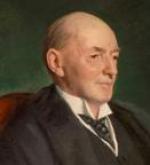 Lord Atkin was called to the Bar from the Inn in 1891, and developed a great reputation at the commercial Bar. He was appointed to the King’s Bench in 1913 and made a Lord Justice of Appeal in 1919 as Baron Atkin of Aberdovey. He was Treasurer of the Inn in 1914 and 1937.

He is particularly remembered for the “snail in the bottle” case (Donoghue v Stevenson) and for Liversidge v Anderson.

Along with F E Smith, Atkin was crucial in the re-establishment of Gray’s Inn at the end of the 19th century and the beginning of the 20th. His legal papers are held in the Inn’s archives; to mark the 150th anniversary of his birth we have digitised his “Graya” obituary and admission form.