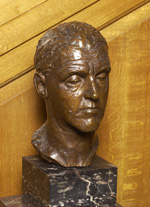 F E Smith (1872-1930; called 1899), later Lord Birkenhead, was equally well-known for his successful career at the Bar – during which he defended Ethel Le Neve, Dr Crippen’s mistress – and his subsequent political career, including a term as Lord Chancellor (1919-22). He was notorious for his biting wit.

F E Smith, along with Lord Atkin, was instrumental in re-establishing the reputation of Gray’s Inn in the late 19th and early 20th centuries.